There is a lot of talk about meditation, the different techniques and its benefits all over the wellness and spiritual media. However, we should be aware that simply doing a meditation exercise and actually being in a state of meditation are two different things. 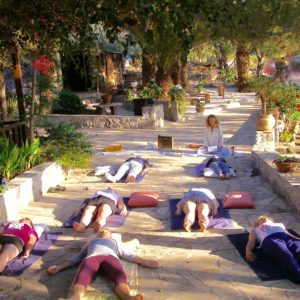 Anyone who has ever tried meditation, guided or solitary, will agree that it is easy to say, but difficult to do. The reason is simple: our stressful everyday life has our body and mind under continuous alert, to the point that the word relaxation has become a lost dream for most people. The good news is that there is an ancient technique called Yoga Nidra that could very well be the solution.

Even during sleep, the mind is so tense that it will not leave the body to rest. Most people get out of bed tired, after 7 or 8 hours of disturbed sleep. Then, drained of vital energy, they try to cope with their daily responsibilities, make the right decisions, and have normal reactions. How do we expect our society to progress when its members are under continuous mental, emotional and physical strain?

Try a simple experiment to understand this better: sit in any comfortable position and try to be absolutely motionless for just one minute. You’ll realize that most people find it impossible to be totally still, even for 60 seconds. As determined as one can be, eventually the muscles will make some move, only to prove how little control we have over our mind and body.

The Principles of Yoga Nidra 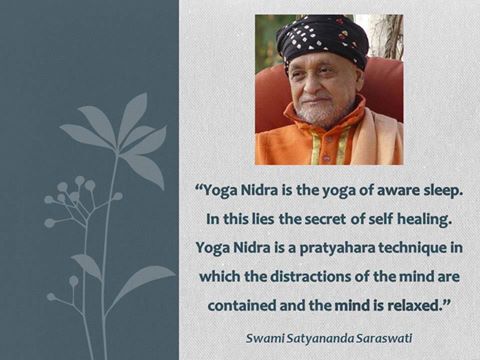 There is an answer to all this in the name of Yoga Nidra. It originates in the tantras and has been introduced by the Indian yoga guru Swami Satyananda Saraswati. It is a guided exercise that drives you to consciously relax for a period of 15 to 30 minutes. This short but very deep relaxation is physical, mental and emotional. During Yoga Nidra one may appear to be asleep but the consciousness is functioning at a deeper level of awareness. Actually, in the threshold between asleep and awake, a spontaneous connection with the subconscious and the unconscious dimension occurs naturally. The consciousness in this state becomes very powerful and can be used to attain deeper knowledge, creativity and even transform the nature of ones personality.

This yogic sleep is not a state of total unconsciousness, but a state of potentiality, where a part of our awareness is fully alert. Experiments have shown that during the state of what we call sleep, we are actually more aware and have more potential, because our consciousness is disconnected from the senses, leaving space for quality reception. It can be compared to a computer: when many programs (senses) are running at the same time, the memory overloads or has limited capacity. All the same with the brain, the mind and the sensorial perception.

Yoga Nidra is practiced in laying position (Savasana) and is not a concentration technique. You just have to follow the instructions that you listen to and let go. You just surrender your body to the floor. During the practice, systematic rotation of consciousness in the parts of the body, is a basic part of Nidra Yoga. This helps to maintain awareness while going deeper in the level of relaxation.

Sankalpa: The Intention of Your Practice 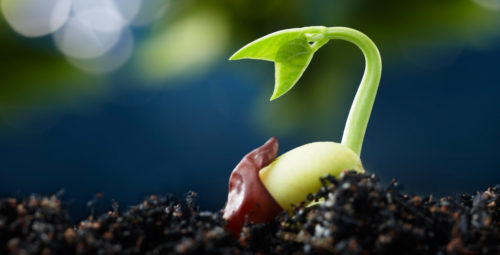 Another important part is the ‘Sankalpa’. It is a resolution seed that you sow deep inside; a message to the universal self you are connected to during the practice. The Sankalpa is silently expressed at the beginning of your Yoga Nidra experience and with full heart and sentiment. You should imagine what it would be like if it were already true. Once again, you are guided to repeat your Sankalpa three times near the end of the practice, when you are totally at ease and in the fertile delta brain-wave state, before going back to the external. This is when your brain is most receptive. At a practical level, assuming you have some unwanted habits you wish to disconnect from, you can sow your Sankalpa on them. Believe it or not, it has results. “Anything in life can fail you, but not the Sankalpa made during the practice of Yoga Nidra” –Swami Satyananda.

Many people, exhausted as they are, tend to fall asleep during the practice. This is not bad, nor it deprives the benefits of Yoga Nidra. The consciousness is present, even when asleep, and everyone amazingly wakes up as soon as the instructor tells the phrase “the practice of Yoga Nidra has now complete.”

Considering the modern lifestyle of non-stop stress in the intellectual, emotional and physical level, Yoga Nidra is really the only technique that requires minimum effort and leads to deep relaxation states. It is a guided meditation journey, that can be achieved by no other method in such a short period of time. 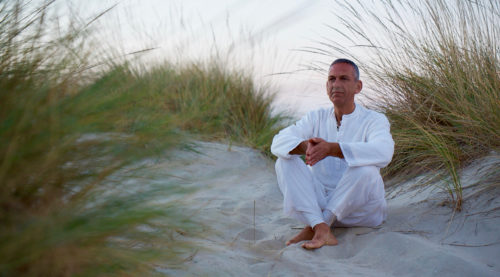 Yoga instructors receive special training in order to be able to guide a Yoga Nidra session. The tone and the color of voice is special, as well as the selected words that are used. A yoga and/or meditation retreat is the best place to start practicing Yoga Nidra on a daily basis. The results are really impressive.

Yoga Nidra can greatly improve the learning capacity of adults and especially children. Children are very spontaneous and, as a result, they can attune themselves to the practice more easily, gaining supreme benefits. Most of all, they maintain the ability to connect with their deeper self and keep contact with the internal center of mental balance. This is a freedom that adults have long lost.

A Form of Hypnosis?

The practice of Yoga Nidra creates a state of withdrawal of the senses. For this reason, some think that it is a form of hypnosis. However, these are two different sciences and actually Yoga Nidra goes far beyond hypnosis. The reason is that while hypnosis is a deep sleep state, during Yoga Nidra we maintain awareness and we are instructed not to sleep. When we are able to maintain awareness while the senses are in complete withdrawal, we transcend the personality barriers and can go to any depth or height. Moreover, maintaining awareness means that the mind is not dominated by the instructor as it happens during a hypnosis session.

With the systematic practice of Yoga Nidra, your true nature and integrity manifests, enabling you to live in peace. You can restructure and reform your whole personality from within. Release of tension, relaxation and peace of mind are the secret of transformation and freedom.

Along his spiritual journey, Satyaprem has particularly explored mantra yoga (Sanskrit vibrational chanting), yoga nidra (passive healing relaxation) and sankirtana yoga (group musical experience). He continues his trips to India, devoted to the spiritual quest. Satyaprem is a member of the Kirtan music group Damaru and a co-founder of YogaNature Retreats.